WANG 2200B with an extensive set of peripherals

An often posed question is that of how to define the notion of a "personal computer". We would answer like this: "A personal computer is a single-user system with attached display (back then typically a CRT) and a suitable complement of peripherals to store and retrieve data and for input/output of data and programs. It is also easily transportable."
One of the first personal computers, PC for short, is the WANG 2200 A/B dating back to 1973. Wang realized pretty early that a key component for such a device was an electronic display capable of displaying multiple lines at once. Comparable HP systems from that time only had a single line LED-display. A nice comparison between these two types of machines can be found here: HP competitive Analysis 9830 vs WANG 2200B (PDF).
This is, in fact, a comparison performed by HP and was suited to aid the salesperson when he or she faced a situation where HP had to compete agains a Wang offer. HP and WANG were THE opponents in these days when it came to scientific calculators and early PCs.
The system 2200 and its successors featured a plethora of peripheral devices as well as a vast library of programs for a variety of scientific and commercial problems. Though, there was no assembler or access to machine language at all. The system was programmed in a BASIC dialect.
The system on display here is unique in Germany with its set of peripheral devices: Paper tape reader (2203), card reader (2234), marker card reader (2214), triple 8 inch diskette drive (2270-3) and a disk subsystem (2230-1) with 14 inch disks. The weight of the disk subsystem alone is about 100 kg, and it cost a whopping 24 000 DM back in its days. Its total capacity is 5 MB for programs and data. 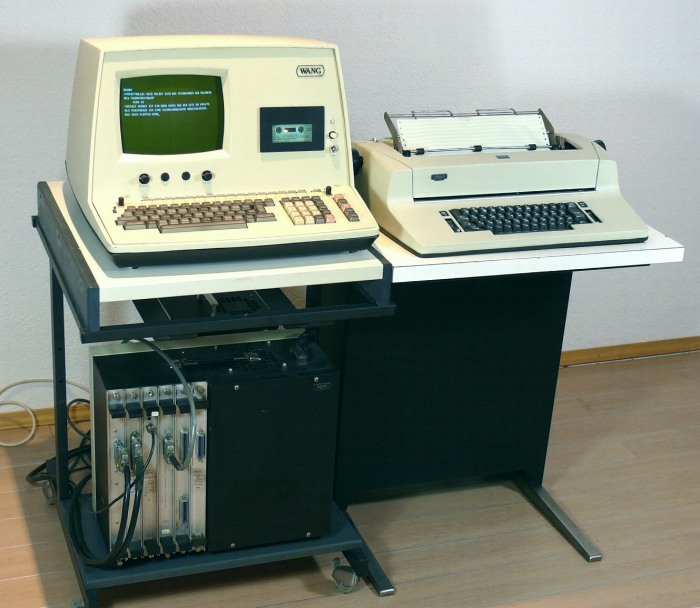 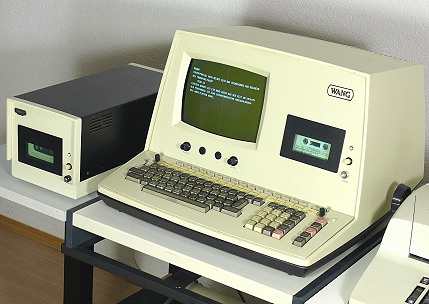 This new acquisition (December 2017) is a smaller version of the WANG 2200B, built in 1974/75, the "S" probably denoting "small". The additional magnetic tape unit (2217) allows to store 1.7 kB of data on one meter of tape at a transfer rate of 326 characters/second. It is equipped with three independent motors and capable of reading/writing in both directions. The tape is always written/read in blocks of 256 bytes. As slow as it is, the low price of the storage media more than compensated for that.
Also interesting is the golf-ball typewriter as output device. Thanks to the unique stepper motor driven mechanics, the system can also be used to plot graphs. The model 2202 is identical with the model 702 typically used in conjunction with a WANG 700 system.

We would like to express our thanks to the University of Muenster who donated this system.

1977 WANG introduced the new computer PCS-II, a much more compact system than the 2200-series. The central processor was still implemented with discrete TTL ICs and shared a common enclosure with all necessary interface connectors and the power supply. A dual 5.25" diskette drive was attached at the top, so the only other peripheral device was a printer. Memory could be expanded up to 32 kB, as small as the memory featured by the much cheaper PET made by Commodore. 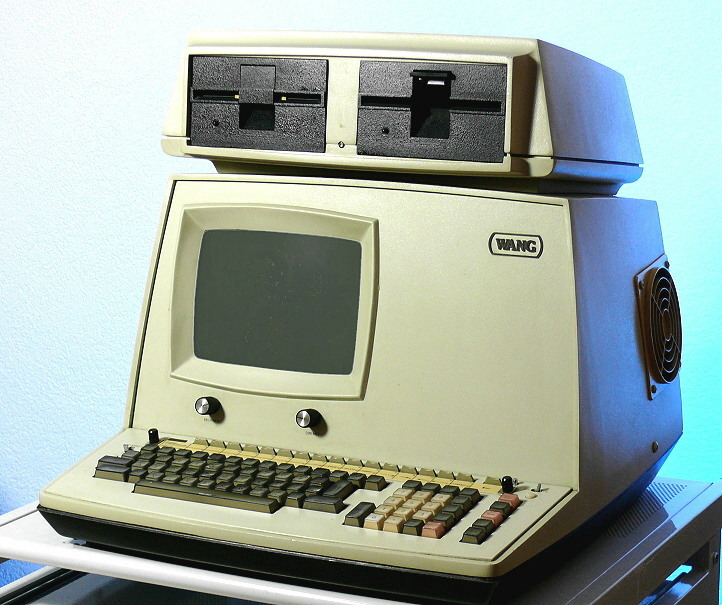 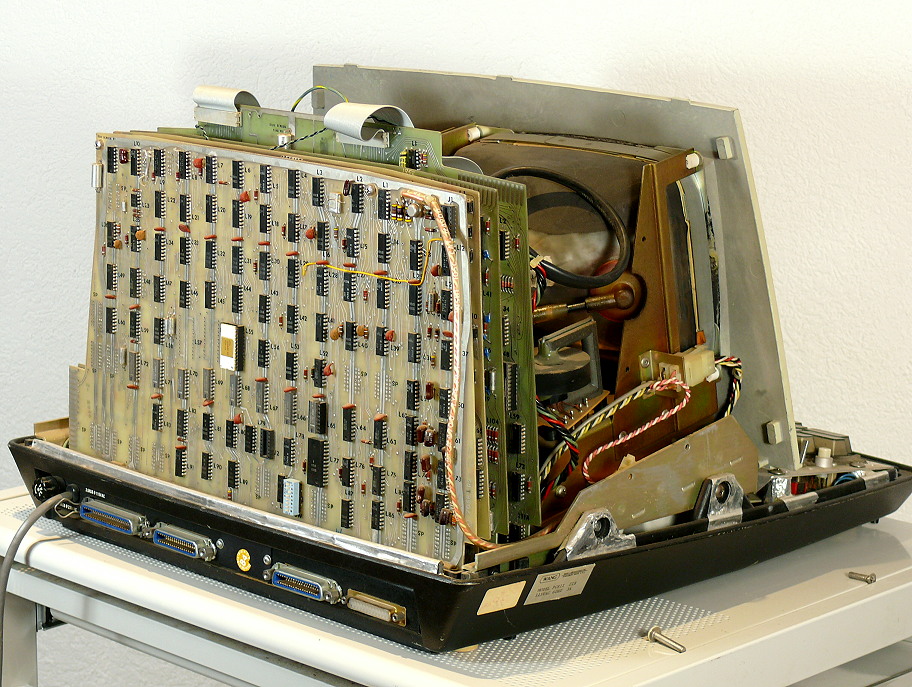 The picture shows the implementation of the machine. All in all, four printed circuit boards (PCBs for short) crammed with ICs, were required. Repairing a machine like this can easily turn out to be a veritable nightmare.
The machine was much too expensive for private citizens: In 1978, one would have had to pay 20 000 DM ($ 7500) for a machine like this. A reasonable car like a FORD Capri Sportcoupe would have cost only 12 000 DM in comparison!


This beautifully preserved machine is currently not functional. We would trade it for another, equally valuable system suitable for our museum. If you are interested, please do not hesitate to contact us.

The Commodore computers are popular amongst the vintage computing community and thus not too interesting for our exhibition. Anyway, for completeness, we have some devices in our collection.
In 1977, most pupils already heard about the new computer technology and wanted to gain experience. 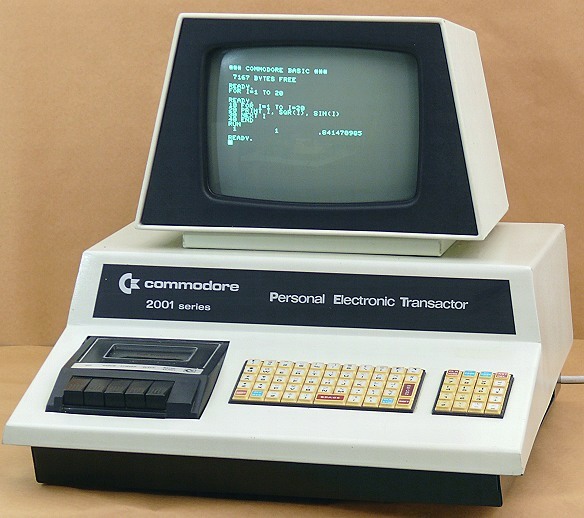 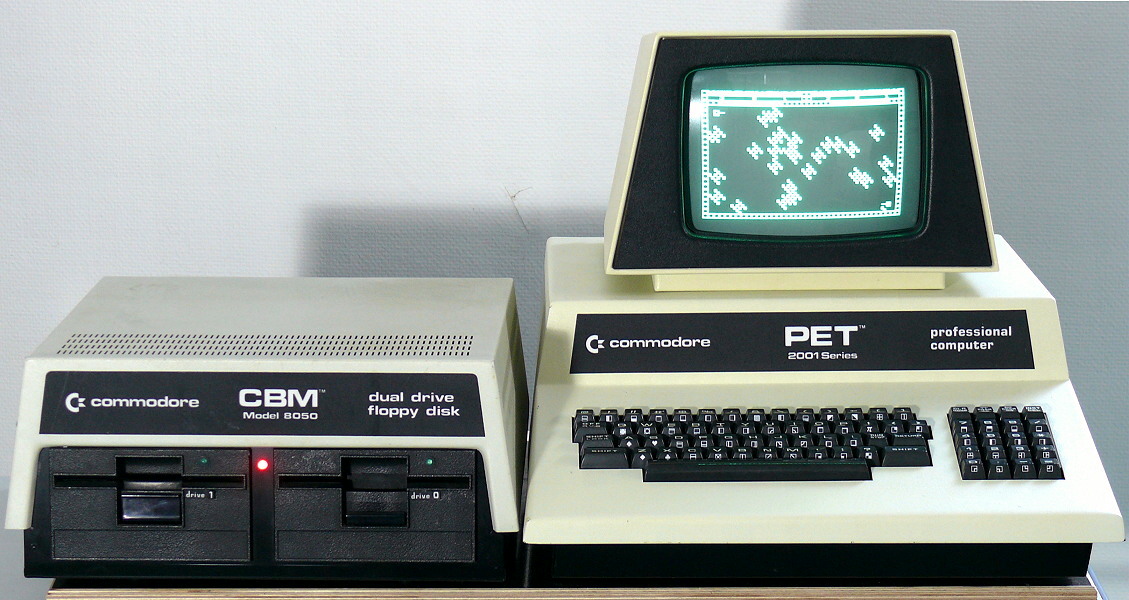 The PET 2001 is a 2000 DM (~1000 US $) device by Commodore and thus was also affordable by schools. Virtually overnight computer pool rooms were created where one had to sign up in a waiting list in order to get entry -- or to wait up to late in the evenings (after 6pm) to enter.

In the beginning, the PET offered 7kB RAM and the very slow "datasette". This long term storage medium was nothing more than a standard 1970s compact cassette recorder. The PET was programmed in BASIC.
Soon it was obvious that this general purpose computer was also suitable for games. In our birthday workshops we observe that today's pupils are fascinated by these classical computer games with their high level of abstraction and apparently no attempt to recreate reality.

The successor model replaced the miniature keyboard (actually quite suitable for children) by a regular one. Given the money, it was possible to upgrade the machine with a 5,25" floppy disk drive which was as expensive as the computer itself. However, with the disk drive it was possible to solve real world problems which made the computer attractive for small buisnesses. 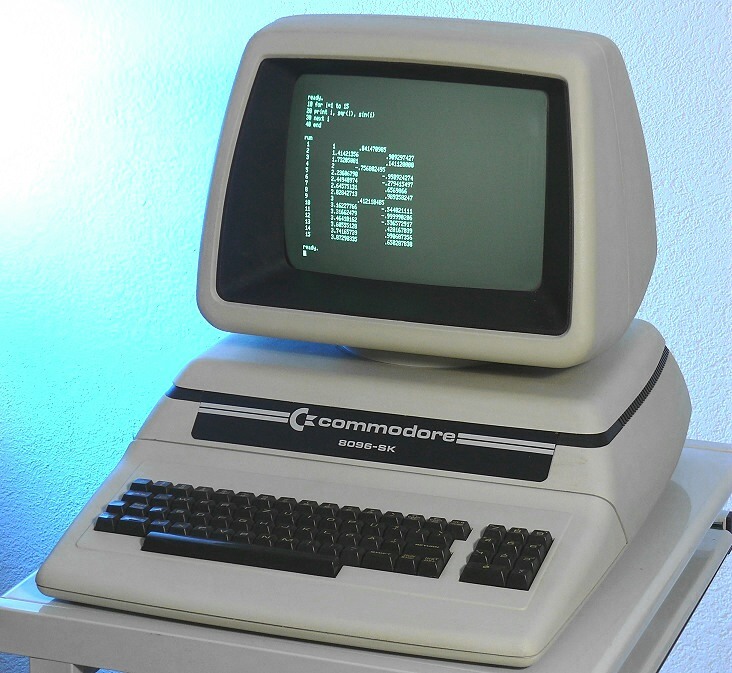 In the subsequent models, the design was revised. Personal computers shall look elegant and beautiful, as demonstrated by the 19080s model 8096-SK (also nicknamed "the egg"). 80 means 80 characters per row, 96 means 96 kB RAM and SK means seperate keyboard -- the keyboard is removable. The monitor can be leant and rotated and can display big and small letters. The workspace was completed with a dot matrix printer.
Special software allowed to operate the computer without further knowledge.
Some technical data:
Central processor: MOS 6502
Processor frequency: 1 MHz
RAM: 96 kByte, ROM: 18 kByte


At this time, the mass production of personal computers started and our exhibition ends, since we concentrate on rarities and very early computing in the 20th century.