It was a long way with many strange and interesting variants until the today's CD. Trumpet gramophone, tape recorders in its history of development, (among others AEG, 39kg heavy full-track technology from 1938), Optaphon, the first mechanically controlled autoreserve (1952) until professional tape recorders from 1960 are shown. Futhermore: Wire recorders, automatical answering machines (1954), devices with "gramophone bands" where the sound was not saved magnetically but like on gramophone records (Tefifon) and many more.

As an excerpt, this is one of the dictaphones from the early office technology.

Only the drive was electrical. The sonic oscillations were conducted through a mouthpiece and an hose made of metal and scored in the rotating disc with a kind of graver. The disc could be played back with an horn (left side of the picture) or with earphones that were connected with hoses to the pickup (left side). Of course the quality was cruel. 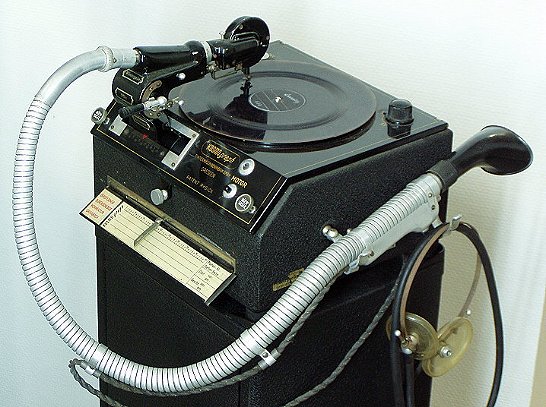 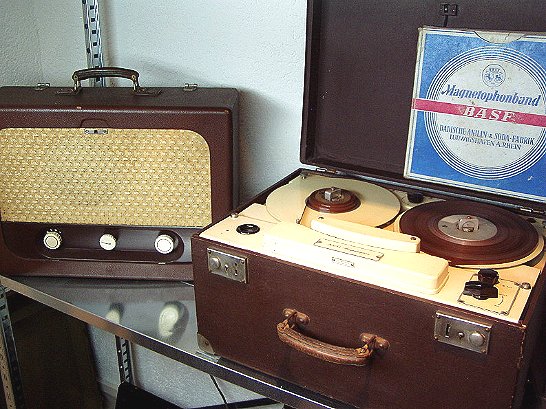 Tape recorders that are built before 1952 are technically very interesting and nowadays very rare. The AEG Magnetophon AW 1 was built in 1948/49 with the state of art of 1939. The auxiliary case contains amplifiers for recording and replay as well as a loud speaker. On the original tape that is pictured in the photography, one can listen to a german carneval convention recorded in the early 1950s. At that time the device was too expensive for private customers. 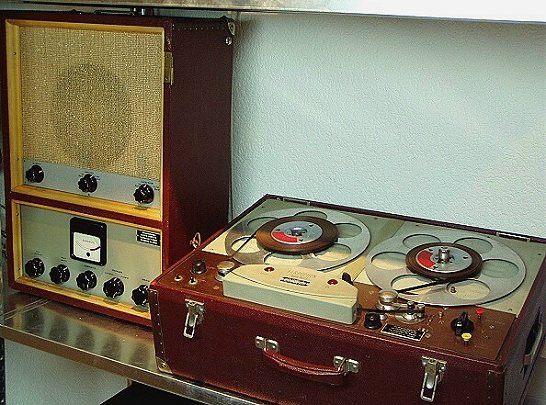 A radio reporter in 1951 had to be a strong guy to carry the Ferrophon around. This semi-professional tape recorder of Loewe Opta Radio AG Type "Ferrophon IIIc/3" was hardly affordable for the non-commercial user. The replay quality is excellent (max. tape speed of 76cm/sec!) and likewise the used components (a lot of copper parts) which was rare in the early past war years. 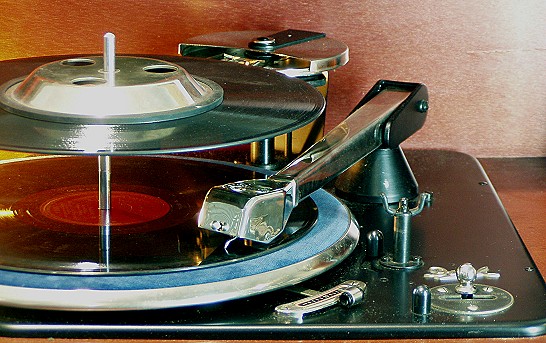 Gramophone records were used as sound storage media for quite a long time. After all, in the 1950s, the shellac records were invented. Breakage was very common in this era, until it was displaced by the vinyl records. Automatic record changers were quite rare in the shellac era. The photography above shows the "Dual 1000", built in 1951/52. The slowly moving pick-up arm while record changing demonstrates the way of listening music at that time. At first this device used the old steel needles that decreased in quality after only three records, until sapphire styluses were invented. 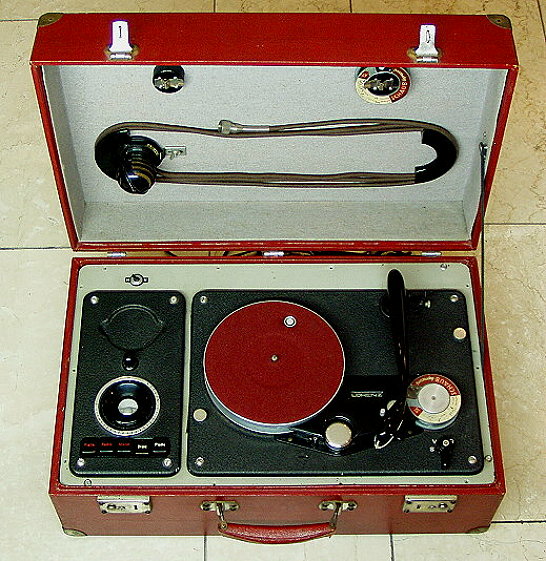 This device (year of manufacture 1952) uses wires as sound storage media. An hour of music fits into the small coil shown on the right side of device. This is the advantage of using steel wire: It doesn't need much space. The quality of sound was almost tolerable, but the flimsy wire was always in danger of tearing.

With this device, you could also listen to a shellac record (78 RPM) while recording it concurrently to wire. The era of devices using wires to store sound began before the second world war but was already finished at 1965. In this time, tape recorders conquered the market. Clicking on the picture will show a larger and more detailed version.

Among others, dictating machines also used wires as sound storage media. Thus they could be built quite compactly. The width of a wire tape is only 7cm about 1.5 inch), but it records about 100 minutes. The Klein-Reporter W 52 (translated literally "small reporter"), shown below, was made by the german company REICHHALTER, year of manufacture 1952. On the record tape (as shown in the photography) you can listen to an original law lecture about the allied powers in Germany after the World War II.

This record is at least 55 years old. Apparently the magnetization of the wire is still very good.