Analog computers were used to compute mathematical, physical and technical problems. They were especially capable of solving equations containing variables that depend on time or differential equations.

Analog computers simulate the given problem by abstracting it to a physical system which follows the same mathematical laws. This system is "plugged together" on a patch-board by using electronical networks which are situated in the computer's inner life (negators, summing unit, integrator, multiplier, function generator, etc.). Unlike digital ones, analog computers don't count but measure (input) parameters. Thus an anlog computer does not even recognize the complexity of a differential equation – it solves even non-linear ones where there does not exist any approach very quickly by simply drawing the graph of the solution. On the other hand, analog computers are not suitable for solving literal equations and suitable for commercial calculations not at all.

All systems that yield the same mathematical model are called analog systems among one another, disregarding their technical or physical origins. The quality of the analogy of a system depends on the accuracy of both approximation and output. According to the price the available analog computers at that time highly differed from each other.

Among others, computer systems by Telefunken (1961-64) are installed. They drew awesome curves on a storage oscilloscope and xy plotter. They solved difficult problems quite quickly, but handing, programming (plug connections) and analysis is not easy. 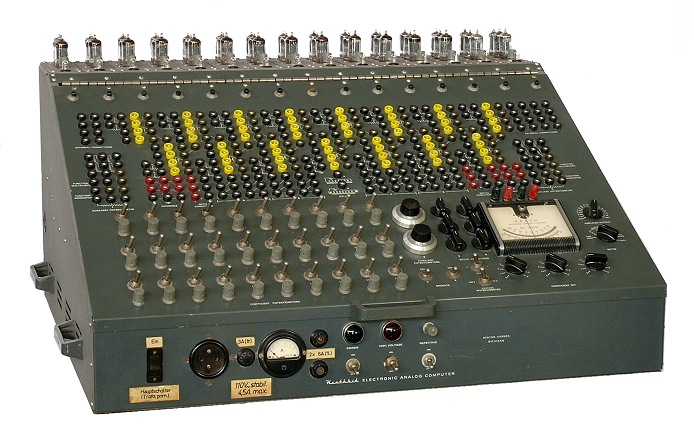 Heathkit, known for it's construction kits, developed an analog computer in 1956 that was primary designed for education. This monster has 70 tubes, whereas 45 were placed external due to better cooling. It is equipped with 15 computing amplifiers. 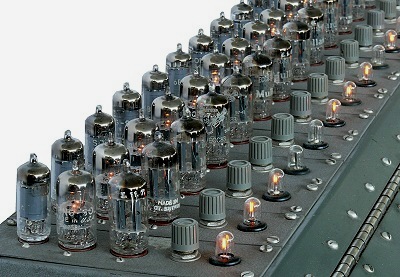 It demonstrates archaic early technology from the first generation. We have connected a compatible xy plotter equipped with tubes, too.
This device is a loan from the FITG (Association for the promition of industrial and technological history).

Excerpt from the original prospekt:
This is a highly flexible and accurate analog computer, designed to fill requirements not presently met by commercial computer. It is an instrument suitable for use as a design tool in industry and universities. An advanced “slide rule” which permits engineering or research personnel to electronically simulate equations or physical problems and save many hours of calculation or experimentation..... Because it is a kit, and the labor and overhead costs found in present day computers are eliminated, the Heath Computer can be obtained for use in situations where a computer was ruled out in the past because of cost....... 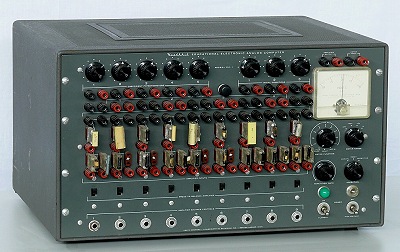 This is a very small analog computer that was designed for educational purpose. It was built since 1960 and was equipped with only 17 tubes (whereas 5 were used for stabilisation of voltage). With such a sparse equipment the device is just good enough to yield the function of an analog computer – it is too inexactly to be used for real computing.
This device costed around 1.900 DM (about 900 Euro/500US$)

The image shows the Telefunkten RAT 700 in the bottom (first model from 1961), above a part from the successor. On the new model you can change the whole patch board and thus change prgorams quickly.
When it's running, you hear an undetermined buzzing (400 Hz), due to the mechanical chopper that change direct voltage in alternating voltage. That was the only chance to disable the disturbing termeratre drift (Changing of the germanium transistor parameters). Principally, direct voltage is amlified by using choppers still today, but of course they are made with electronic components. 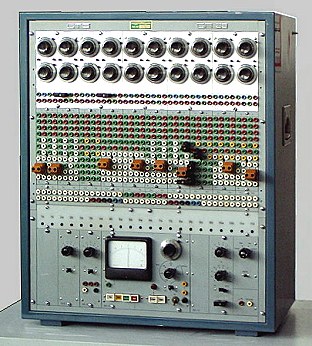 It's quite remarkable that the EA22 from GTE looks like the Telefunken computers. But unlike the competitive products, the GTE computer is equipped with more computing amplifiers (22 units), has a much clearer system design and is therefore much easier to maintain. This analog computer was build in the early 1960s from the german firm Goldmann Technische Eelektronik, Ulm/Donau.

EAI 180 from "Electronic Associates Incorporated", New Jersey, is a so called hybrid computer (hybris [greek]: From twofold parentage), year of manufacture 1970. It contains the parts of an analoge computer and these from a digital computer. The device is equipped with IC's from the first generation (DTL-technology). The calculation circuit is plugged with cables on the front panel. The cycle time from the analoge part can be set to less than 10ms. With that parameter, an equation will be solved at least 100 times per second. So you can watch the output with a simple oscilloscope. 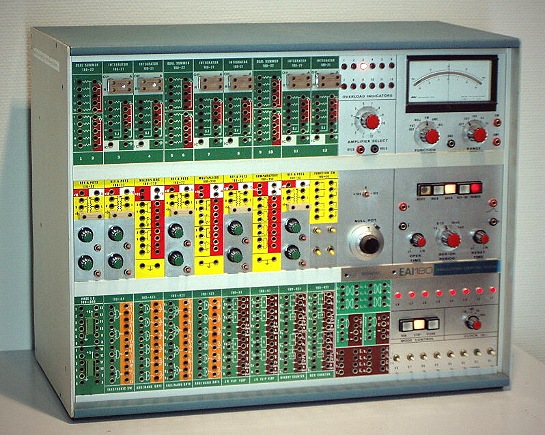 The EAI 185 is almost exactly the same as the EAI 180 (shown in the photo above). The only difference is the stage of expansion – you will notice that the EAI 185 is much more taller than the EAI 180. They were both used in the applied physics and informatics of German Technical Universities. 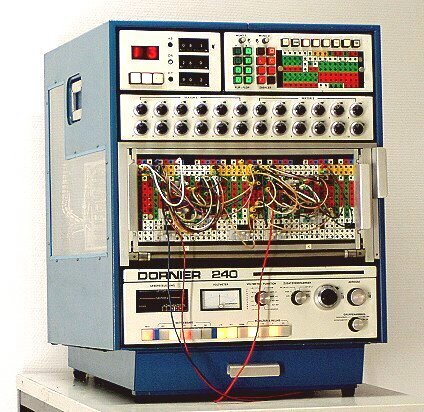 The analog computer DO 240, made by the German enterprise DORNIER, is a high precision device, compared to the EAI hybrid computers, which were used almost only for education due to their moderate precision. It features very much elements in a highly compact case. Among others there are digital potentiometers (gating pulse manually adjustable), a highly customizable digital clock generator (which uses nixie tubes as a display), a digital counter, two function generators and many more. This computer was built in the early 1970s and was priced at 80.000 DM (about 40.000 euro/dollar)

Last but not least a mechanical analog computer that was used up to the 1970s for scientific calculations without hand and desk calculators.
The picture above displays a 1.8m long demo slide rule made of wood (1950s) that was used in schools for students since the 10th grade. Compared to hand calculators, these analog computers also had some advantages: Students could not give absurd computing precisions, these "computers" were cheap and quite fast. The big disadvantage was that adding and subtracting was not possible at all.
To get higher precisions in the 1920s, there was this "Cylindrical slide rule". This 60cm NESTLER device can be compared to an ordinary slide rule measuring 12.50m.