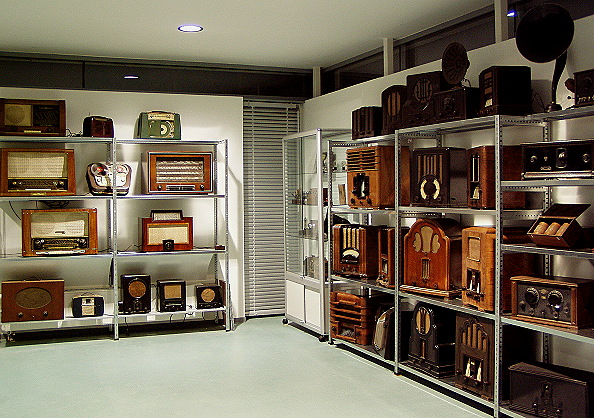 Some of the broadcast devices in the exhibition – from left to right: the twenties, early thirties, mid-thirties, late thirties, early fifties.

Broadcasting was launched in Germany in 1923, being the third country in the world (right after the USA (1921) and Great Britain (1922)). From the technical point, it even would have been possible to launch large-scale broadcasting in 1920. 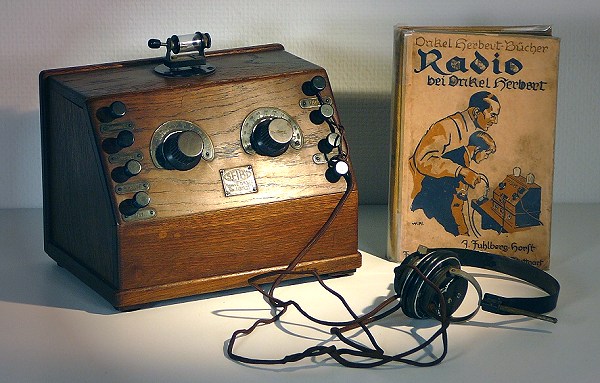 Detectors are passive tuners which are powered straight from the electromagnetic wave which is recieved via a very big antenna. Therefore there was only a headphones plug and no loudspeakers at all. To adjust the device, the user had to poke with a small needle on a crystal, having only a small chance to recieve a powerful broadcast station. The crystal was a small 5 mm galena or pyrite unit with physical characteristics of a diode at some special configurations. If the user found such a configuration, the crystal served as rectifier. In the early 1920s, this setup was a cheap alternative to the expansive radio sets. At the right hand in the picture you can see a typical manual to instruct the user into early radio technology.

It is astonishing to see the incredible speed of the development of broadcasting systems. Beginning with very simple devices like the one above, using crystals for demulation, the technology became mature very quickly. This process took no more than 15 years from the first steps to near perfection. This development is reflected in the apperance of the devices as well. While the first recievers were of a very technical design, later devices turned into wonderful pieces of furniture, fitting neatly into the average upper class household. We have illustrated this page with examples from both types of devices. 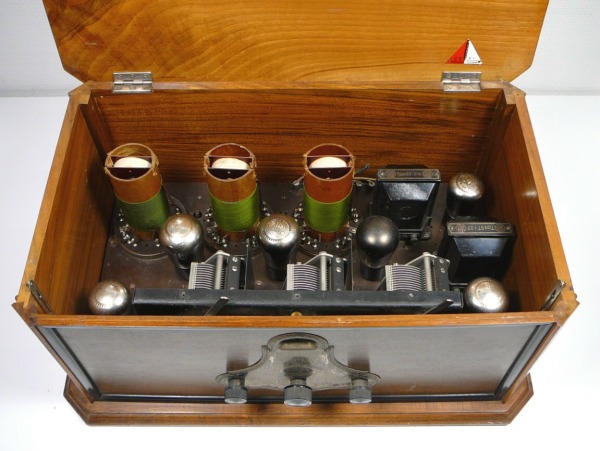 This is a reciever made by SABA (year of manufacture 1927) with open cover. You can see three inductors and rotary capacitors. Therefore this kind of device is called "three-step-oscillator". The device is decorated with marquetries (not visible in the picture detail) and even the interior is made of veneerd exotic woods.

In the 1920s, the electric power supply has not been installed all over the country yet, therefore the first broadcasting recievers were made for battery operation. Therefore listening loudly and frequently to the radio was an expensive buiseness, since batteries discharged quickly.
The following devices were ready for the mains supply. 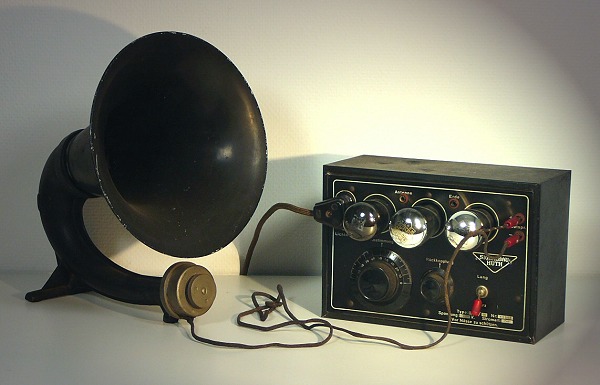 Receiver made by Signalbau Huth (model E72): This is an example of a cheap receiver made in 1928. The sound quality is rather bad, especially with that horn loudspeaker, made out of metal. Listening to the radio was sensational, but not luxurious.

There have always been companies which built very stylish devices. You could already take a look at the Saba device. The Telefunken T 40W is another representative of such a device with a very nice interior. In the following, you can gain an extraordinary insight into this device. 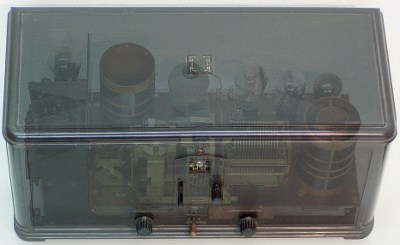 Clicking on the picture yields the innards of the Telefunken T 40W.

The following pictures show some recievers of outstanding design and outstanding technical features. The picture gallery could be continued with open end.
Many other curiosities can be found in our museum, and there's no epoch without an outstanding audio experience: Detector devices, battery driven recievers (1920s), "Luxus-Super" (1930s), early radiogramophones (1932) and the first postwar recievers with motor-channel search and cable-remote control: SABA Freiburg 3D (1954). This milestone features five built-in speakers, having such an impressing sound that even today's people with all their consumer electronics are faszinated of this 50 years old device. Overall, you can get an impression how broadcasting was experienced two or three generations ago.

Loudspeakers were integrated into broadcasting devices since about 1932. Furthermore the devices were (of course) still adapted to contemporary style. These Telefunken export devices (T650 and T500) especially stick out. Being built as "super" models (improving recieve quality by generating an intermediate frequency) the technical working was very good.

Having intelligent all-in-one furniture suitable for all kinds of music is an old dream which appeared some years after the introducion of mass broadcasting. The radiogramophone on the left is the Telefunken 650 GK from 1931/32. The record player was quite modern, featuring a magnetic system and electric motor. On the other hand it still used gramophone needles and the needlessly weighty pick-up stressed the records. Nevertheless the sound quality of the radiogramophone was much better, compared to an ordinary gramophone player. The chassis is made out of noble walnut trees, therefore this piece of furniture was very expensive. 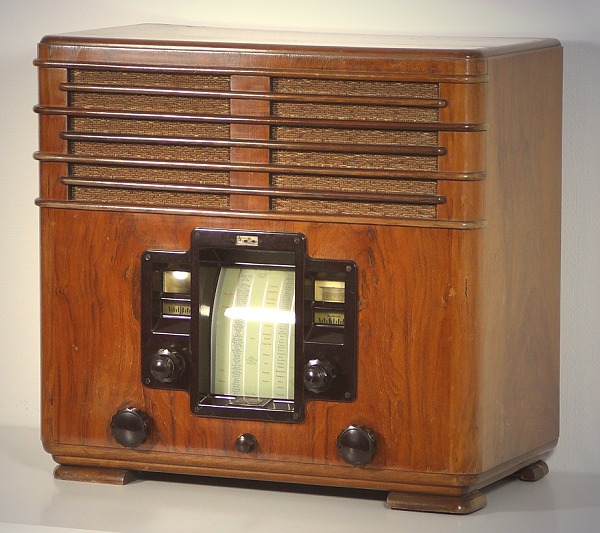 Körting Ultramar: One of the most nobel, most complex and most expensive recievers made in 1935. Its circuitry contains 11 vacuum tubes driving two loudspeakers which results in an astonishable quality of sound. See also some pictures showing the Innards of the Ultramar.

The portable reveceiver from Metz, built in 1956 and shown on the left, is another outstanding piece of equipment. It is a so called "Kofferradio" (suitcase radio) since it is portable and optionally battery driven, and of course since it is as compact as carry-on-baggage. It even features an integrated recordplayer - forseeing the development of modern multipurpose receiver/CD-player combinations. Of course it still used tubes. Youth would have been able to listen to Elvis Presley at the swiming pool if the device were not as expensive.