In contrast to computers used for scientific applications, commercial data processing systems have a different structure, since they are optimized to support large storage systems and to process lots of data, as in payroll applications and the like. Sometimes the distinction between scientific and commercial systems is not a clear one. The examples below are typical small to medium systems for commercial applications. 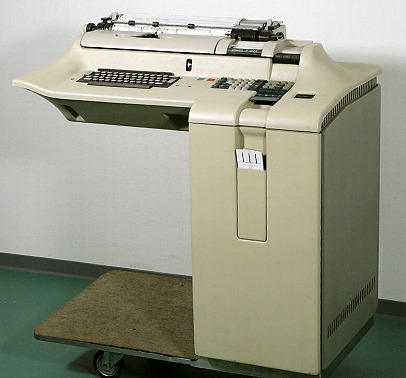 1967 the PROGRAMMA 101 was not only extended with respect to memory but also coupled to an electric typewriter. This made it possible to print the results of a computation. Nevertheless, this combination was restricted to printing numeric values only. If text was required on a printout it had to be typed manually.

The typewriter could also be used standalone without control be the PROGRAMMA 101. The memory system, which is based on the magnetostrictive effect, has an overall capacity of 320 bytes organized as 10 registers with 30 digits each.

This early "personal computer" was designed by the italien artist Mario Bellini. Its unique design won several avards. Even today it is admired for its aesthetics. Following Olivetty computers were just plain cubes. Moving this unique piece of computing history is quite a feat at 130 kg. 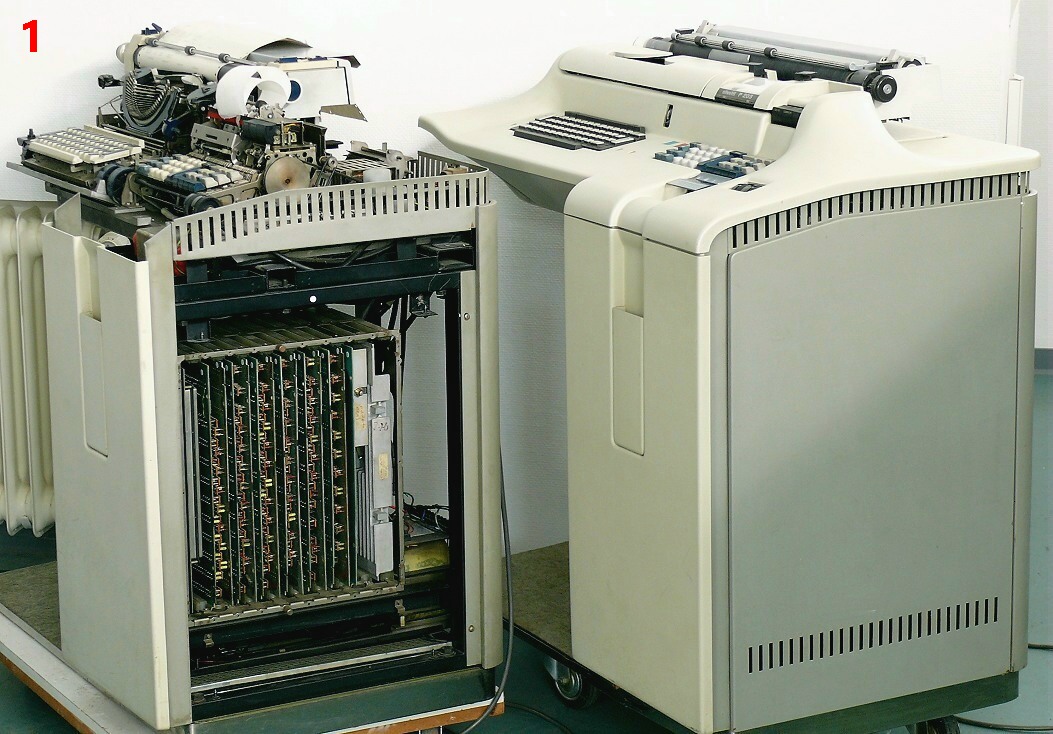 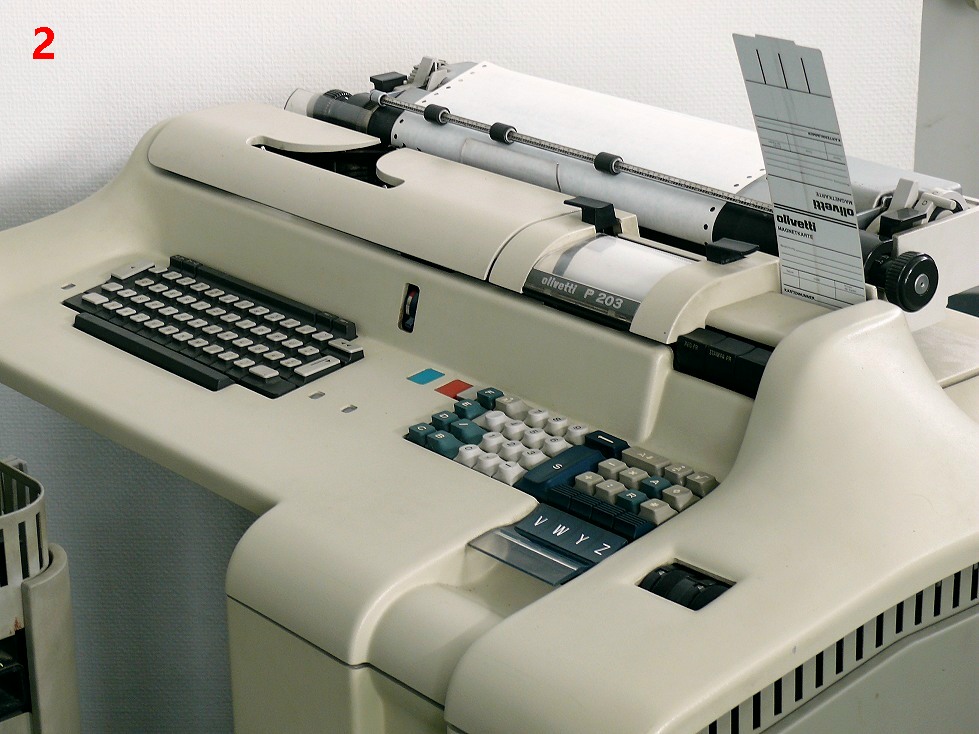 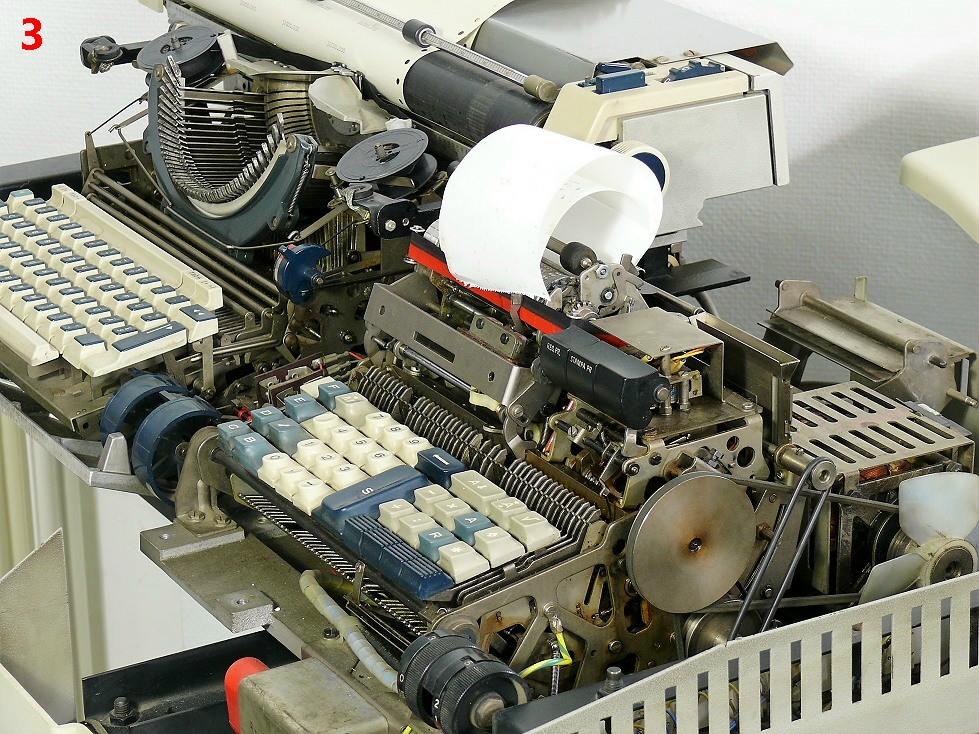 The pictures above can be enlarged by clicking on them. The first picture shows the first model of this machine as well as its successor system with a faster typewriter (on the right). The second picture is a detail photograph. The third picture shows the incredibly amount of mechanical parts in this system. Both machines in the museum are fully operational. 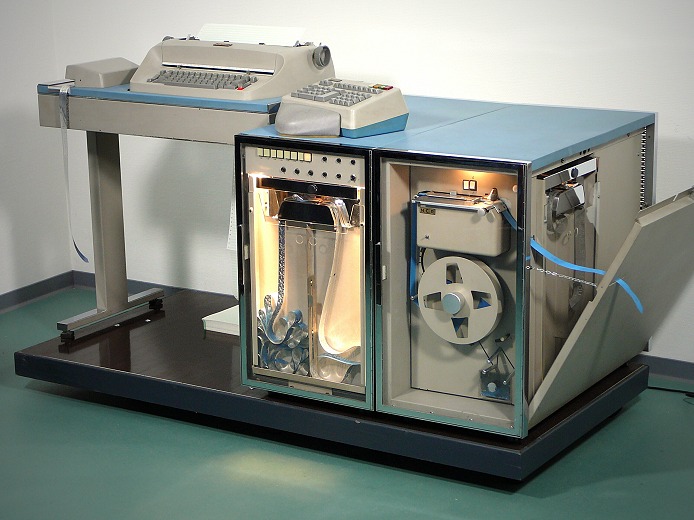 The NCR 446 is a typical example of a 2nd generation computer (transistorized). It was developed 1966/67 in Germany at the "National Registrier Kassen GmbH" in Augsburg by four engineers fresh from the university. One year later their development was finished and the system announced.
The architecture is rather unique. Programs are stored on a paper tape while operations are controlled by means of a threaded wire ROM. The system was sold as a accounting machine but was not limited to that area of application.
The system not only contains the paper tape reader for the program control, but also two paper tape readers for input data, one paper tape punch, a keyboard, and an IBM ball-head typewriter.
This system was quite expensive. The basic model without a paper tape punch and without the additional paper tape readers for data input was sold for about 35,000 DM (about 18,000 EUR) - about as much as three mid-class cars would have cost at the same time.
The NCR 446 was the first "small" commercial system which was able to print text as well as numerical values. Such a machine was used by structural engineers to perform the necessary calculations and directly generate a printout that could be used by the customer. (Competing systems like the Olivetti Programma 101, 203 could only print plain numbers on a small strip of paper.)
Watching the operation of the machine is a great experience. Things like the calculation of a square root allow the viewer to get an idea of the underlying algorithm. Since the program is stored on a paper tape, every step performed by the machine can be seen.

Clicking on the picture yields a