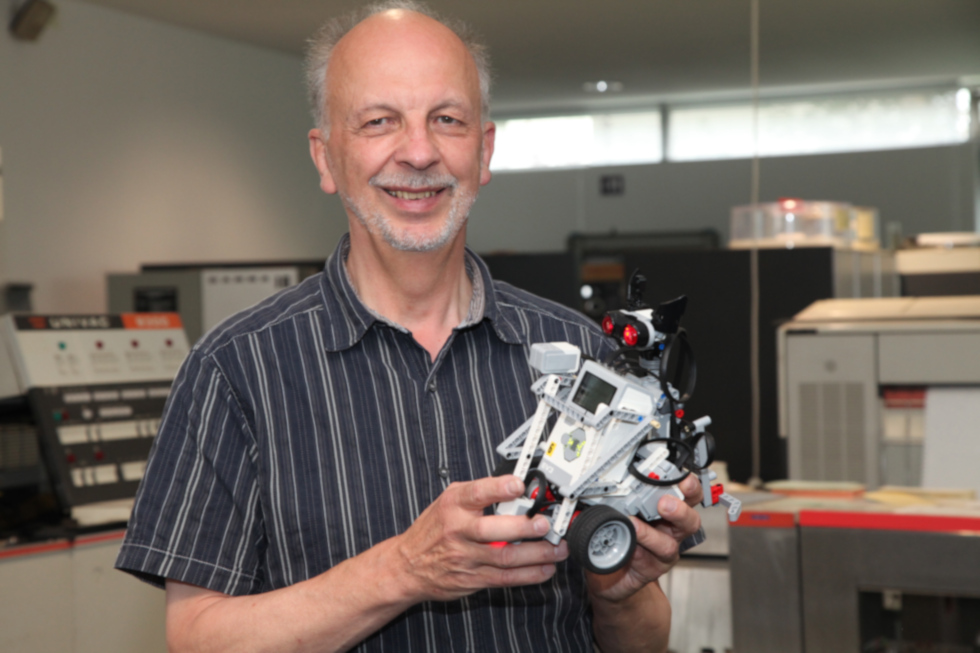 Heribert Müller in 2016, presenting his robots workshops for kids in the museum. Picture by courtesy of Stephanie Kreuzer (FNP)

Here we go — Heribert Müller, our father, is dead and leaves behind the technikum29 computer museum. We, that's his three children, grown-ups with their own occupations, lifes, partly their own families. The museum was largely a “one-man-show”, with Heribert Müller as the single head. He had a passion for reparing a broad range of devices, from the old tube radio to the data center. Despite having a broad network of friends, there is only a handful of real supporters, an “inner circle” consisting of other museums such as the nearby Analog Computer Museum or the U Stuttgart Computer Museum as well as some remarkable private persons. Noteworthy, nobody of the three of us has a sufficient understanding about neither the technology nor substantial details of the extend of the collection. We are all standing in front of a huge amount of work even to comprehend the current situation of the museum and to work out a decision on its future.

Printed inventory marks before their use.

One of the blessings of the museum is Heribert Müllers lifelong urge for independence. One of the consequences is the fact that the whole collection is located in private property and there is no need to rush. In fact, already almost one year passed since his sudden decease and still (unfortunately) little happened. We are in the comfortable situation of not having a need to clear the floors and to close the collection as fast as possible. There is no rent which has to be paid, instead current expenses can be covered by rental incomes of the mixed use of the museum building.

What I did in a couple of days in the Summer 2018 was a first approximation of the collection by walking off all storage rooms as well as the exhibition and doing a first — very coarse — inventory. Having printed 900 fine inventory cards (their code is open sourced on github), I used up almost all of them! In this first inventory, which resulted in a decent table/database which is supposed to be released in the web soon, there are only big units listed (say bigger then a typical notebook). Inventorying even smaller devices, loose parts, not even to mention cables, boxes with stuff or sparse components will require ten times as much effort. Given the overall shape of the collection (both the exhibition and the warehouse), it is partly more a huge unsorted collection of something.

What's the monetary worth of the collection? Without doubt, the one-of-a-kind display items which are in a well-restored shape are part of the exhibition and especially part of this very website. It is an open secret that some of the display items are very rare and wanted on the collectors marketplaces and in fact worth thousands of Euros. Regardless of wether there is a future for the museum or not, we want to avoid paying a large amount of inheritance taxes on the collection. Therefore, we need to continue to get an overview of what is actually part of the legacy, but also come up with price tags. Here, it is quite obvious that selling the collection is a large amount of work where every single device requires attention and technical knowledge to archive a good price on the highly specialized and small marketplaces. We would have to pay experts to do so, which of course reduces the overall gain. For some large blocks, such as our Bull's or Univac's, there will be hardly any interests and we would have to pay a disposal company to come with a truck. In total, we estimated the weight of these cabinets as around 20-30 metric tonnes. The disposal of so much metal would cost hundreds of Euros.

In fact, there is common understanding in the (legally still lasting) community of heirs to preserve the museum and to strive for a future. In the last year, I worked a lot on the organizational and ideational fundamentals of such a future museum. The museum must leave the private sector and go for the public benefit. There is also a need for content realignment (mainly due to the lack of ressources), in order to focus on the unique selling point: An exhibition of fully working computers. Worldwide, there is no other collection with such a claim.

In the next blog post, I will go into detail about what ideas I have worked out during the last year.

About the author of the blog post “The Heritage”