The picture on top shows from right to left:

This truly one-of-a-kind machine, a UNIVAC 9400 mainframe, is the heart of one of the most impressive exhibitions of the museum. In the 1960s it was used in the computer center of an industrial complex located in Cologne. Following its replacement by new hardware, the system was given to a school in Cologne where it served for many years helping the computer science teachers.

In September 2005 it found its final place in our museum. A regional German television program made a feature about the difficult transport of the machine from Cologne to the museum. This transport involved two trucks due to the sheer amount of equipment (a UNIVAC 9300 system was part of the transport as well) and its weight. We would like to thank UNISYS Germany for taking over the cost of this transport.

Our UNIVAC 9400 is something special since it is operational (again) - only very few mainframes from this era are still in an operational condition due to the complexity and difficulties of maintainance and operation. This restoration was facilitated by the facts that our machine was in near mint condition when we got hold of it and it came with full documentation. Currently there are some minor hardware bugs which will be fixed in the near future.
The system on display is a stripped down version of the original setup due to space constraints in the museum. As a positive side effect this leaves many peripherals as spare parts ensuring the possibility to keep this machine up and running in the future.

The UNIVAC 9000 series dates back to the mid 1960s. All machines from this series were implemented using small scale integrated circuit (DTL technology, a predecessor of the well known TTL chip family). All DTL chips used only contain a few simple gates - mostly OR and NOR circuits. Much of the logic has been implemented using silicon diodes which allowed the construction of large arrays of AND gates.

This makes our UNIVAC 9400 a member of the so called "third generation" (first generation being tube based, second generation using discrete transistors).
The members of the UNIVAC 9000 family were:

As an interesting note all systems of this series used a magnetic thin film memory, a then revolutionary development which, unfortunately turned out to be the most error prone part of these computers. One of the main advantages over then conventional core memory was the non-destructive read out which allowed for shorter memory read cycle times.

Due to the insufficient reliability of this memory system the complete subsystem was eventually replaced by an even more modern semiconductor memory system using some of the first memory chips made by INTEL. More than 1200 of these chips were necessary to implement the 256 kB of our machine.

Like many other mainframe systems the UNIVAC 9400 features a channel system for the connection of peripheral equipment. Slow peripheral devices (like the punch card reader, printer, etc.) are connected using multiplex channels while high speed devices (like disks and tapes) are connected using selector channels. These selector channels allow for transfer rates of up to 333 kB/s - a remarkably transfer rate for this time.

The standard software for the UNIVAC 9400 included many libraries, an assembler and compilers for the languages FORTRAN and COBOL. In addition to that a report generator (comparable to IBM's RPG-II and RPG-III implementations) was available to facilitate commercial data processing.

One of the most impressive parts of a UNIVAC 9400 is the system console featuring literally hundreds of incandescent lights. This makes it possible to monitor about 600 internal register bits while operating and maintaining the machine. After working with such a system for some time, the operating personnel got a feeling for usual and unusual light patterns which helped a great deal to track down bugs.

By now many programs started running again. For example you can make this mainframe create you an up-to-date chart for your personal bio-rhythm of the next four weeks. This time-consuming task is perfomed by a program written in COBOL.

The price of an UNIVAC mainframe system was incredibly high and would have paid for a chain of new cars with a length of 2,3 kilometers. Incredible: UNIVAC 9400 = 470 cars (Volkswagen Beetle)

We would like to thank to the UNISYS Corporation for funding all trucking of the big machines. We would also like to thank Dr. Jürgen Steen from the Historical Museum Frankfurt for lending several UNIVAC boards. Reparations are quite difficult without comparative boards. 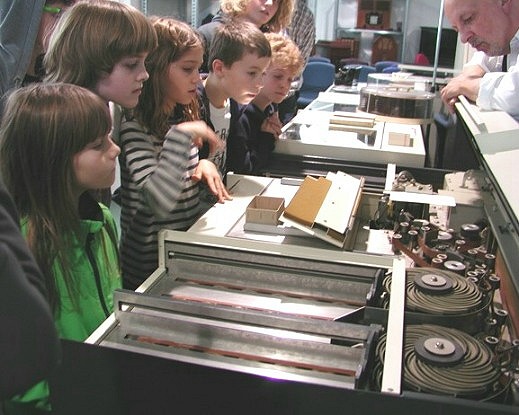 Young visitors are impressed by the speed of the punch card reader.