After the ANITA tube calculator, the development of transistorised second-generation calculators began. Due to the increasing number of users, the development was very lucrative, even considering the enormous costs.
Every company that released a device designed a completely new architecture. Many different concepts emerged. The following devices are a selection of very early devices (year of manufacture 1964-1965). 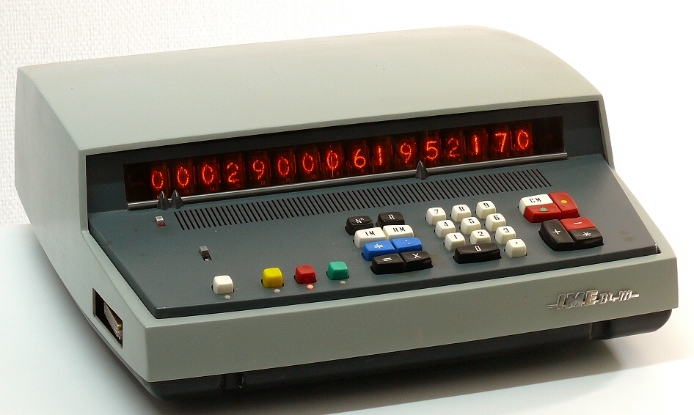 IME 84 (Industria Macchine Elettroniche) was the world's first desk calculator using transistors. This represented enormous progress, compared to the ANITA. Using core memory, there was much more memory, allowing many more application fields.
This calculator is at least able to exponentiate a number, but it cannot yet extract a root.
The design of this device is quite appealing. In comparison, the German device made by Olympia looks ungraceful. 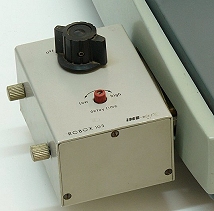 The device has a strange interface on the left side to connect the ROBOX 103 (see picture on the left). Using this small device, one could enter numbers much faster. Turning the switch to "Addition" enables auto-adding the number just entered after a short timeout. This yields a great disadvantage: If the operator was too slow (or made some short break), only parts were taken in the memory, without any feedback. Thus the complete calculation was error-prone. The successor "IME 86" therefore didn't feature an ROBOX interface any more. 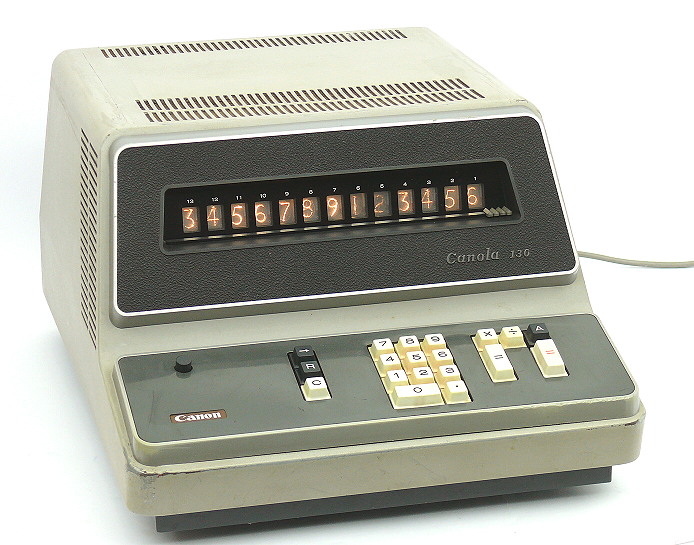 In 1964, Canon built the first Japanese electronic desk calculator, using germanium transistors and flip-flop memories. Visually it looks like a prototype. The whole back of the device consists of very big boards. They are not plugged in, but soldered, at the cost of ease of service. This was typical for the year 1964, when companies tried to get their device onto the global market.
The display is remarkable. Instead of using Nixie tubes, the device features 143 lamps and a lot of light conductors to create digits and the decimal point. The only advantage of this technology over Nixie tubes is the appealing luminescent paint.

The Olympia-Werke AG (Germany) invented the "Elektronischen Vierspezies-Rechenautomat" (electronic calculator for adding, substracting, multiplying and dividing). The distinctive feature was floating point arithmetic, 3 ALUs, 1 storage unit and 3 "memory units" (3 random use registers). The device contains a 384 bit manually threaded core memory, germanium transistors and Nixie tubes, but no external interface. Therefore users could not store or load programs. Olympia missed this important step, so the calculator became obsolete soon. The design was also quite outdated, and the device turns yellow quickly in the sun.
The same device was resold in the USA by Monroe with the model number 770.

The legendary WANDERER-WERKE AG were a typical company specialized on office machines and launched the WANDERER CONTI in 1965. You can read the original prospectus of the "first printing electonic universal automaton". This leading role did only lasted for a few weeks, since Olivetti and Diehl followed close behind. 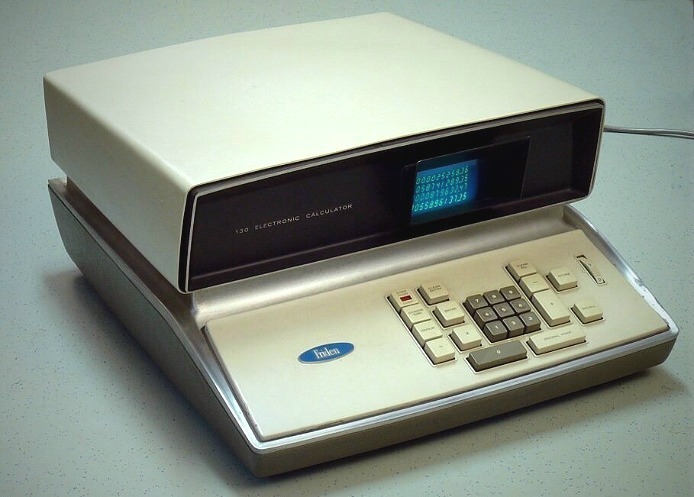 The American Friden Calculating Machine Company was already a pioneer in desk calculator technology: in the mid-50s they built the first mechanical calculator in series that was able to extract a root.

The FRIDEN 130 was announced in 1964. It was the first desktop calculator featuring a CRT display, using an oscillocope tube to display the contents of four internal registers of the machine. The memory is based on a magnetostrictive line.
The overall design of the calculator is quite futuristic - the machine might well be found in a space travel movie of that time. The smallest model featuring only the four basic arithmetic operations was sold for about 5000 DM while the larger model, the FRIDEN 132, which included a square root function, was priced at 6700 DM.

A beautiful advertising leaflet, one finds here: "Mathematics for the Space Age"