With the development of IC-technology 1967/68 brought along with the development of high-performance calculators. We have also arrayed what was among other things the world's most expensive desk calculator: the WANG 700. This device outshined everything else on the market (costing with very extensive peripherals well over 70000 DM or 35000 Euro). Furthermore the first calculator with an alphanumeric display (HP 9820, 1971) and the world's first BASIC-programmable desk calculator (HP 9830, 1972) are installed. With these systems you can marvellously plot function graphs together with labels. Three years before something like that was unimaginable! In 1971 the first scientifically programmable "pocket calculators" with the size of a matchbox came on the market, too. See also: Tabular list of desk calculators 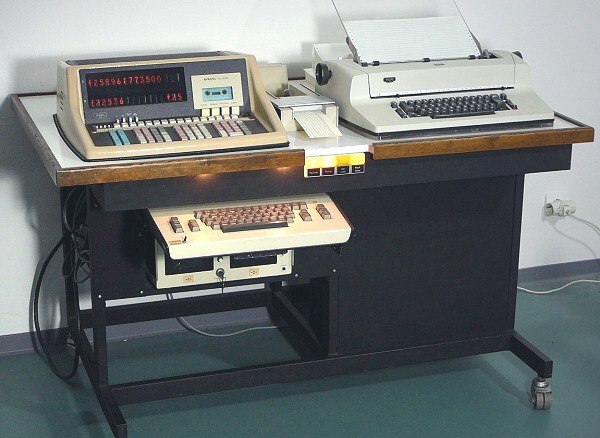 The picture shows a unique system with a WANG 700 at its heart. It is a one-of-a-kind machine and was built specifically for the department of mathematical didactics of a German university. Students of pure mathematics were forced to compete for the scarce CPU time on the university's mainframe while students of mathematical didactics had exclusive access to the system shown which eventually led to some arguments between both faculties.

On the left the calculator itself can be seen – it features a two line display made from so called NIXIE-tubes, has 2 kB core memory and a built in cassette drive for mass storage. For years this machine was the fastest desktop calculator in the world.

In the middle the optical reader can be seen (which, in fact, obscures the manual punch card reader which can not be seen in this picture). On the right is a modified IBM selectric typewriter which can not only be used to print out text, but to create plots of functions as well. Below the calculator an alphanumeric keyboard can be found; on the bottom an additional dual cassette tape drive is located. Programming of this machine was quite cumbersome - a simple plotterprogram took 794 program steps to perform a task which could be done on a later HP desktop calculator like the HP 9830 in only 36 steps using HP-BASIC as its programming language.

See a larger and more detailed version of the photography 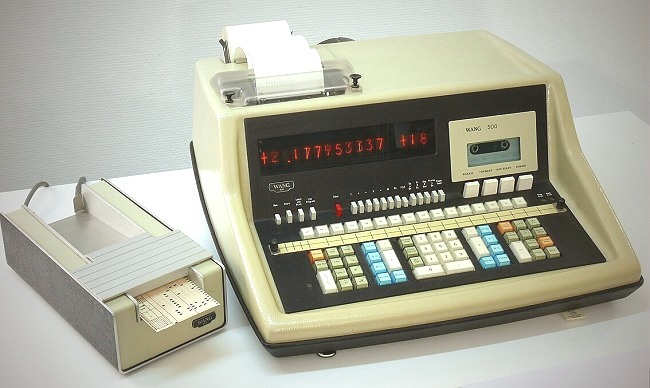 WANGs versioning scheme is a bit unusual: The computers were released in this order: 700, 500, 600, 400.
The Wang 500 (year of manufacture 1971) is a pared-down version of the 700. The most important scientific functions were programmed directly in the threaded ROM, they did not have to be loaded via cassette any more. In the upper left they embedded a small drum printer (The Olivetti P 101 already featured such a printer in 1966). The cassette drive for recording programs is the same like in the 700. The "marker card" reader (instead of regular punch cards, the fields are only blackend) was perfect for schools and universities. Many users could mark cards manually with a simple pencil and afterwards test them on a single computer.
Wang promoted the computer as "The World's Second Most Powerful Calculator" (Wang 700 was the first one). This slogan could only refer to the computing speed, since the HP 9100 was much more universal. The 500 series is very rare, since it was superseded by the Wang 500 shortly after being released. The computer in the picture is new and unused. It has been found in the basement of an old stock from Wang and was passed to the museum, still unused. Therefore it looks great, even being more than 40 years old. 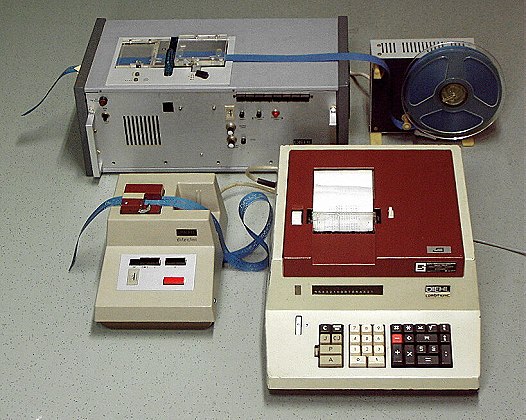 In 1970-72, DIEHL selled the Combitronic, featured with germanium transistors from the early 1960s (used for the printer interface), (still) a paper tape used for booting, a slow delay line memory and ceramic ICs (modern LSI technology). This device is a prime example for the enormous speed of development of new technology. The transistor logic was implemented by simply taking four LSI ICs together. Therefore the computer is logically (almost) identical to the almost obsolte Combitron, but the case is much smaller and the whole computer shrank up to two small boards (see detailed pictures from the Diehl Combitronic). In the picture above you see the compatible paper tape puncher ELS 850 and the reader "Dilector" on the left.

The history of development from the HP-desk calculators in one rack: