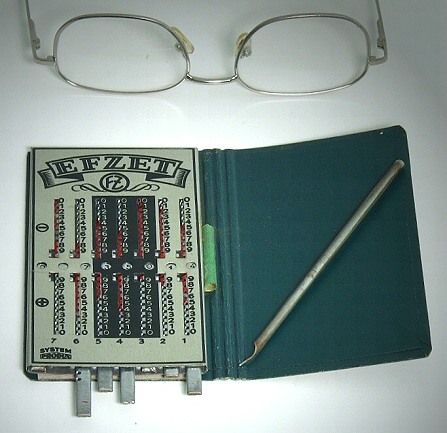 For the sake of completeness, we mention the predecessors of the electro-mechanical calculators: pure mechanical "pocket calculators" of the early days. The picture on the left shows a small slide rod calculator from "Produx". This handy device Efzet was intended

for the buisenessman, industrial, craftsman, engineer, student and even the housewife

like the instruction sheet (german only) tells. This device does not seem to be very useful. 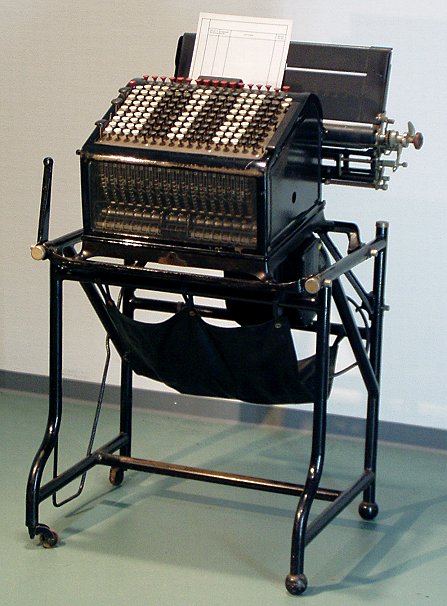 The first electronically calculating calculators were gigantic mainframes in the 1940/50s. Until then, calculators worked mechanically. When the handwheel was replaced by an electric engine, the era of mechanical calculators began.

From the first fully automatic machines (1927) until calculators with accumulating memory (1960s), mechanical calculators computed the result indepently after user input. Curta I, The world's first "pocket calculator", has 1/3 from the volume of a Coca Cola-pin and is consequently the smallest four-species machine ever built. Looking at mechanical calculators, one quickly recognize the enormous importance of the positional notation.

Burroughs Mod. 2. The first printing calculating machine was invented in the USA (about 1905) and was selled worldwide. It features a complete keyboard for 17 digits, a printing unit and a long carriage for the sheet paper. The device could be used as a simple electronic accounting machine. At that time the engines could already be built just compact enough for such a device. Anyway, the huge engine (for today's circumstances) had to be placed below the device (on the right hand side in the picture). The sack below the engine is intended for collecting the leakage oil. 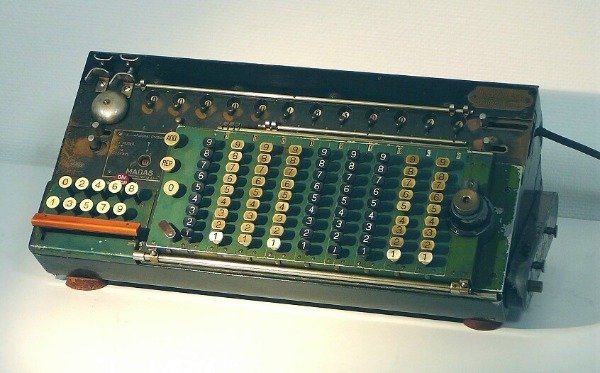 MADAS, an electromechanical calculator from 1927 made by the calculating machine factury "Egli AG" in Zurich. Since multiplying and dividing needs some time, the inventors installed a small bell (at the upper left) that rings after the calculation has finished. 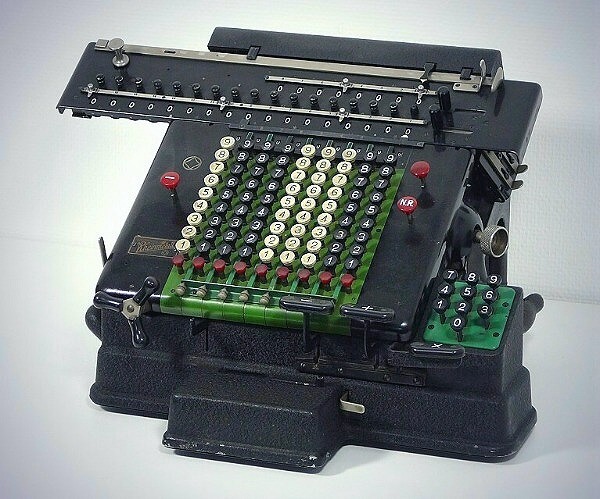 In 1932, Rheinmetall extended an adding machine with a surface mounting, thus creating a 4-species calculating machine. The comfortable usability seems to be the reason why they called it "Superautomat". Calculating is the only ability of this colossus. 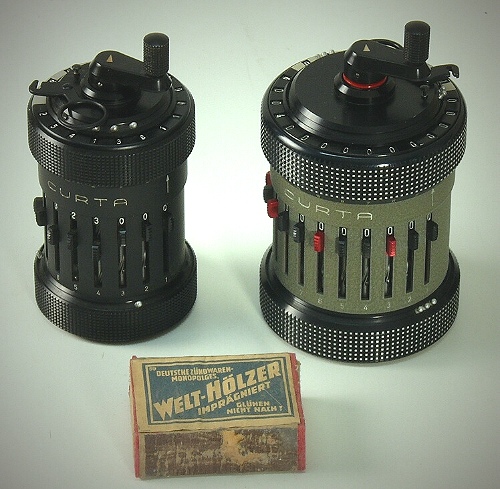 Curta I and Curta II
These outstanding small pocket calculators were produced almost unmodified from 1948 to ca. 1971. This is unbelievable for today's technology products. The Curta could perform all basic arithmetic operations. Packing all the complex mechanics into such a small volume was an enormous challenge. For comparision of the sizes, we put a matchbox from the same era on the picture.
The Internet is full of literature about the Curta, e.g. the story about inventor Curt Herzstark. 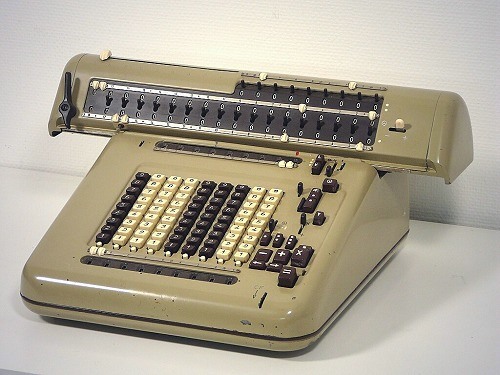 DIEHL VSR-18, one of many mechanical calculators built between 1955 and 1965.
The engineers were hardly pressed to design better and better machines, until the limit of feasibility. So the operating instructions say: "This DIEHL-device VSR performs outstanding work". That is really true: For example, one were able to cache results and to transfer back them anytime you want to. With this feature daily calculations like 25 + 12 x 7 - 17 x 6 could be solved without notating anything. However, this luxury still had a drawback: Maloperation could damage the whole device.

Olivetti Logos 27-2, a mechanical monstrosity as a last stand against the then modern electronic calculators. The first version hit the market in 1965, followed by this big second modell in 1967 which weighs in excess of 27 kg! This calculator features three memory cells, automatic carry, floating point and several additional features.
Olivetti proudly presented this printing calculator as a workhorse for scientific applications, "slightly" exaggerating its features and versatility.
As typical applications, the calculation of square and cubic roots were demonstrated as well as the solution of systems of linear equations, determinants, polynomials, series expansion etc. Of course, these tasks could not be performed by just pressing a single key. Instead, simple algorithms were necessary, written down as sequences of basic operations which often required the user to enter approximate values. The calculation of the cubic root of 2993582.625 for example required 25 key strokes and three inputs of values. So much for workhorse for scientific applications - without any means of storing a program working with this machine was mostly a tedious task.

It looks as if the brilliant designers of mechanical calculators wanted to created a last fulminant hurrah just to show what could be done with mechanical systems although the time was ripe for electronic calculators. It should be noted that Olivetti already had introduced the rather sophisticated electronic calculator PROGRAMMA 101 back in 1966. Keeping such a mechanical marvel alive is a formidable task. Even using the wrong oil or grease for lubrication can lead to stuck mechanisms resulting in a completely unusable machine in a short time. Unfortunately, our machine has suffered so badly that it is beyond repair. By clicking on the small pictures you will get some impressions of this mechanical marvel. 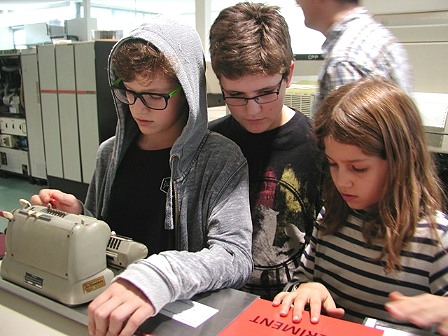 Hands-on-workshop: It is a challenge for kids and young adults to perform a division operation with mechanical devices.