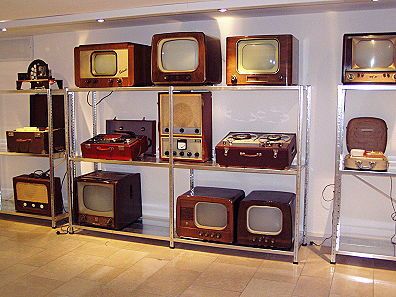 Extract from the television room

In 1952, television was a sensation and only affordable by paying several monthly salaries. Many still working televisions from 1952 to 1956 (of course black and white, one programme!) show how television was watched in its early time. You can also see the former East Germany's first television (round picture tube), "colored television" (by using a foil) and projection systems from the early fifties. 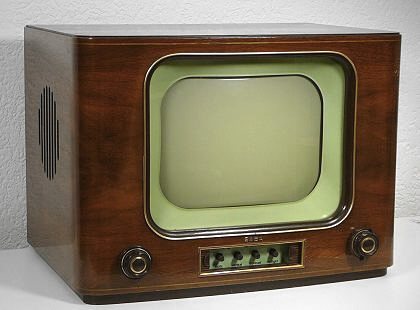 One of the first television recievers from the postwar period is the Saba Schauinsland WII. In 1954 people crowded together in front of the showcase from a radio shop for watching the soccer world championship just out of the 36cm-picture tube installed in this device. 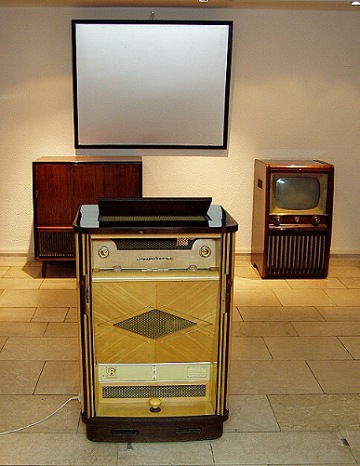 Since 1956, the German company SABA produced projection TV-sets. The advertisements said you could even watch television in light rooms which are not shaded. This promise was exaggerated: Only with a special projection screen (made by Saba) which reflects the light primarily in one direction, you can see a sufferable image. Clicking on the picture will show you an explanation of the Telerama projection technology.

On the right hand in the background you can see a multifunctional device made by Nordmende to see television, hear to broadcasting and gramophone records. On the left the concurrency device with the same features made by Telefunken. They are both made in 1954. 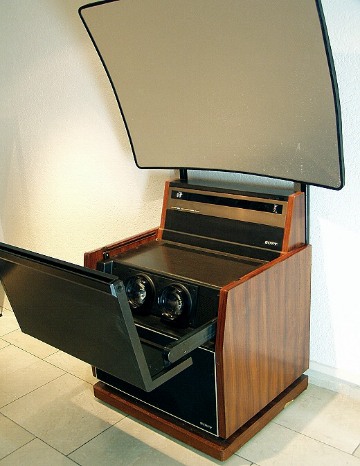 This is the world's first rear projection color television set. It was built in the early 1970s and does not yet use ICs but transistors (second generation). 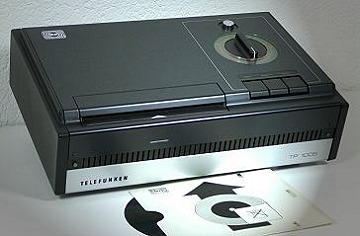 Furthermore we demonstrate executable heavy video recorders with 1- or as well 2-inch tapes (Ampex, Grundig, Philips) and players for optical videodisks which are quite awesome. In 1975 the Telefunken optical videodisc player TP 1005 (picture on the right) came on the market. A mechanically driven micro-diamond scanned the optical videodisks. Unfortunately the system did not get recognition any more because the disks stores only ten minutes of video. 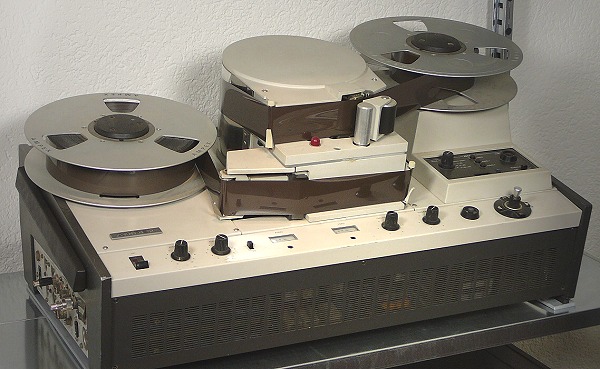 AMPEX VR 650, an early bulky transportable video unit from Ampex, equipped with 2-inch tapes from 1964. It was the first transistorized apparature made by Ampex, featuring germanium transistors. Of course the device was not intended for privat use. Although it was versatile, hospitals often recorded radiographies with this apparature.