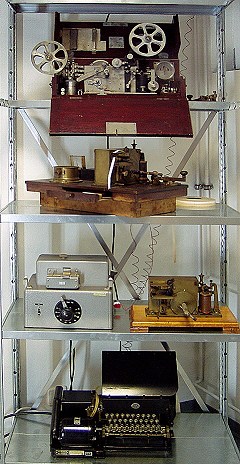 An extract from the area fax and writing engineering.

Humans always wanted to communicate over very long distances. In the early 20th century "Morse" was almost synonymously used for the telegraph technology. Around 1938 the first traffic telegraphs arised. 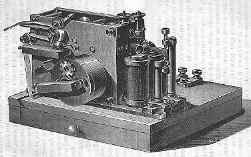 The picture above was printed in the little book "The technical telegraph service" from 1876. As you can see, morse telegraphs were already used at that time. This kind of technology is amazing due to it's overwhelming simplicity.
Clicking on the picture which shows the rack yields the telegraph station, made by S.A. HASLER (Bern, Switzerland). 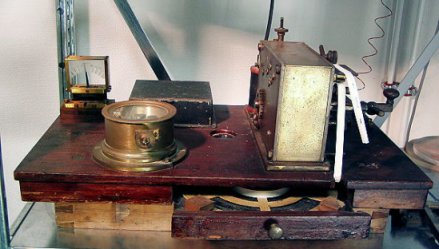 This telegraph station was built in the time about 1900. More than 100 years ago, no one cared about time thus communication was quite unhurried. 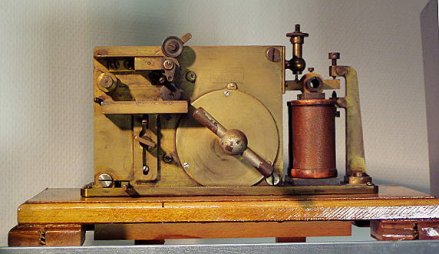 This picture shows the edgewise view from the morse reciever. The apparature is connected to a paper tape morse transmitter from the 60s.

It is quite incredible: Fax machines were already mass-produced in 1929. However, it was difficult to run these machines. The first pracitcal fax machines are a german invention: The "Normalpapierfax" (a fax machine that used usual paper) from Siemens-Hell, year of manufacture 1956, with tube technology, is still completely runable. An unhurried and transparent fax transmission (DIN A5) takes about 4 minutes. Theoretically you could send a colored fax with that machine! 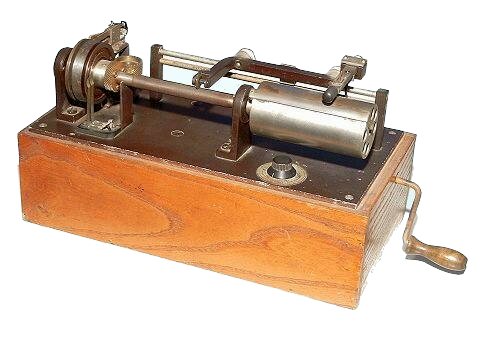 The Fultograph is an "image reciever", invented by the Englishman Otho Fulton in 1929. This devices made it possible to transmit weather chartes by funk for the first time in the world.
The following text is cited from an unknown source from about 1930. It shows up a strange world for today's people:

Who hasn't felt, when listening to a thrilling wireless transmission from the opera or when enjoying a radio play, the wish to experience such a feat not only with one's ears, but also with one's eyes? How often have you regretted to rely solely on your own imagination rather than being able to actually see the presentations which sound so natural in your ears? The realisation of these aspirations, which would be possible by distance cinema, has not only failed due to the technical complexities of the problems, but especially because of the enormous costs caused by such an equipment. It is now a truly invaluable achievement that every owner of a good wireless apparatus has been put into a position to call something his own, which is at least a preliminary stage of a distance cinema, namely a radiophoto receiver, providing beautiful and steady images out of the ether. In the future, broadcasting stations will be able to illustrate their acoustic transmissions. Scenic images of public performances, portraits of artists, comments on lectures, illustrations of daily reports, sketches of sporting events, weather charts, public quizzes and many

other such events can be made an issue of broadcasting in a simple way. All owners of a suitable apparatus can – without previous technical knowledge and without a dark room – receive these images, which will appear in front of your eyes in brilliant brown colour in a matter of minutes and which will be ready in stable conditions immediately. The simple appliance providing such miracles was quietly developed to such a perfection by an English inventor, Captain Otho Fulton, and within a short period of time regular image broadcasting will be carried out in most European countries, so that the owner of a "Fultograph" – this is how Fulton called his image receiver – will be able to receive an international image broadcasting programme in his own home. The images are true to the originals, distinct and pleasant to watch, and apart from that of particular artistic efficacy because of their special granularity. It takes 3 to 5 minutes to transmit a picture in the format of 9 to 12 centimetres.

The rotating roll, which had been coated with chemically preperated paper, was spirally scanned by an attached "pen" (tabluator). In this way an electric current could flow from the pen over the paper to the roll in the rythm of the picture informations. That way, the image developed by electrolysis. 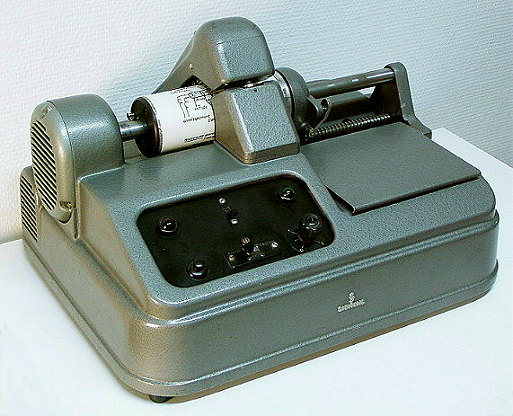 This "remote copy machine" was produced in 1954/55. The ink-based write approach was already matured. Sad to say, the service-friendliness was quite bad. The bulky device (27 kilogram) scans only a DIN A5 sheet. Already 1956 the successor KF 108 came on the market, with great improvements. 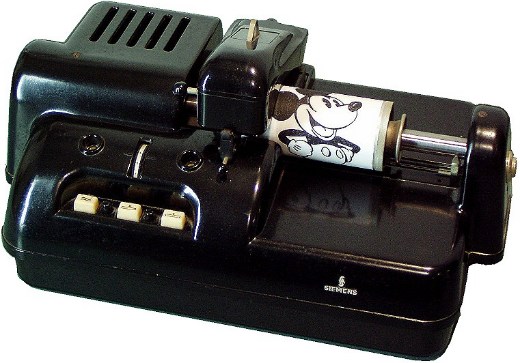 The KF 108 works in a similar way like the Fultograph. Instead of the electrochemical recording, ink is put on the usual paper with the help of complex mechanics.
It works similar to the fultograph. Instead of a electochemical notation, ink is brought by a small rotating sapphire reel onto normal paper.
A KF 108 will even be able to send and recive faxes when the modern fax devices are trashed. Of course, it is not compatible to today's devices. Siemens produced the device in a typical german manner: Everything is huge and indestructible. In these days you did not throw everything away.

The next fax (year of manufacture 1963, also used for weather cards) weights 90 kg and has even electonic tubes. In the 1960s, weather offices were able to recive the latest weather cards (with pages bigger than DIN A3) with these machines.
The Hellfax-Blattschreiber BS 100 shows how exhausting it was to send DIN A2 fax drawings in the 1960s. This device was used to recive weather cards with radio communication. You can also see an Hellfax unctional diagram. Clicking on the picture will open the front lid. 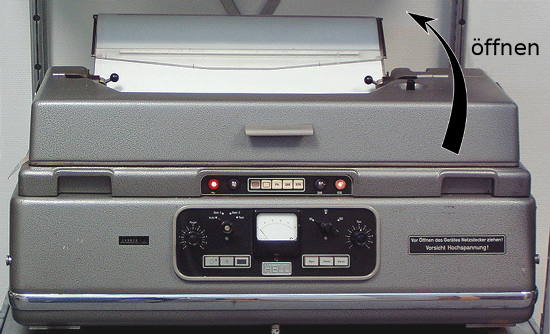 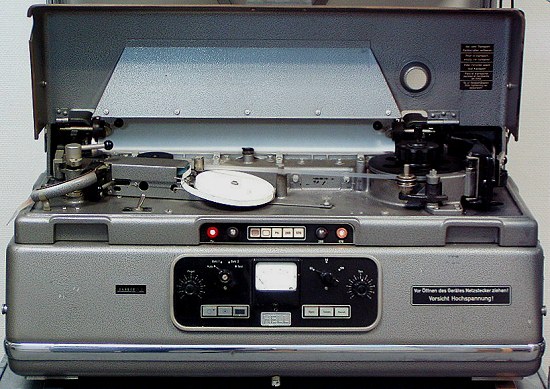 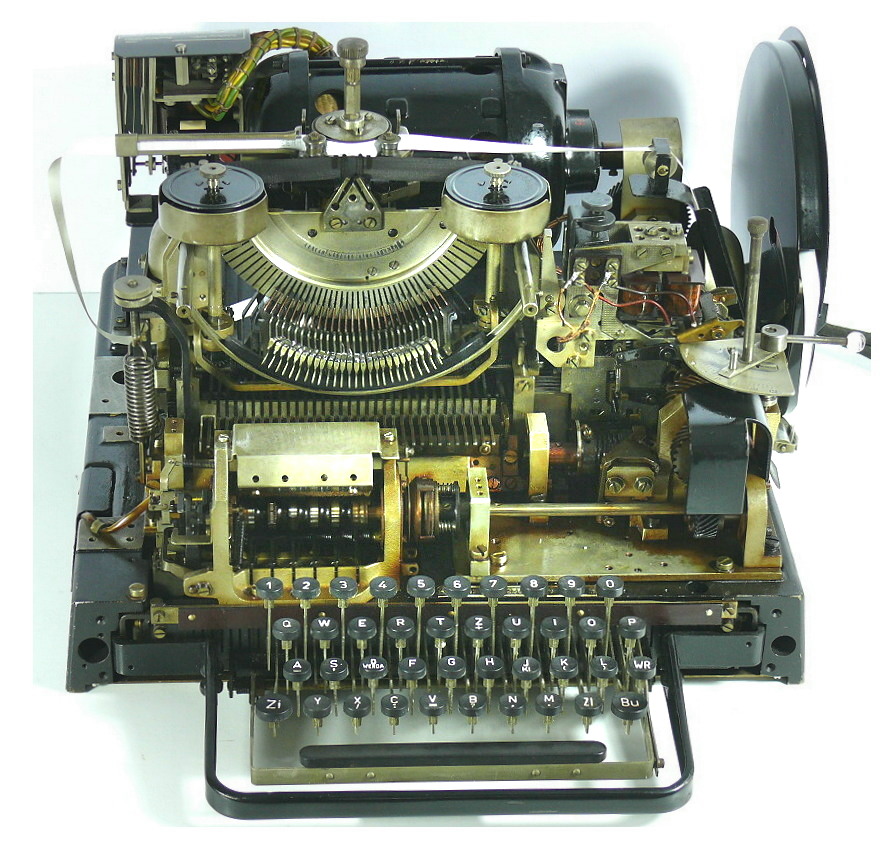 The heyday of mechanics in telecommunications was clearly marked by a wide variety of teletypewriters (by the way - this reflects until today in the naming of serial line interface devices in UNIX which are traditionally called "tty"). The so-called "Springschreiber T32" is quite rare and was built between the 1930s and the 1950s. It writes onto a narrow paper strip. It is built so heavily that it is nearly indestructible. As F. Schiweck ("Fernschreibtechnik", 1942) notes:


"The Teletypewriter is one of this most stunning productions and a marvel of mechanical design. It requires the best materials available and is a marvel of construction. According to general opinion, its relability of operation is extremely high."


Back in those heydays of mechanical engineering the field engineers required a steady hand, good hearing to spot troublesome noises, and, of course, an oil can as well. Their profession vanished in the 1980s.

The Hellschreiber GL 72, year of manufacture 1952 (in the picture on the left). This device assignes an unique sequence of frequencies to each key. Thus the device could make use of the telephone network, like the later modems did to build up the internet. This feature distinguishes it from the ordinary teletypes.

Nevertheless the clatting teletypes coined high speed telecommunication for decades. The first teletype was presented in 1930 by Siemens & Halske – only three years later, the German Post used them for communication all over Germany. The first official connection in Germany was build between the capital, Berlin, and the Hanseatic City of Hamburg. Unlike the Hellschreiber, the teletype did not use the already existing telephone network, so they had to build up a seperate telex network.
At first there were only 21 subscribers in 1933, but only six years later, they counted 1500 subscribers in 1939. In 1975 there were actually more than 90,000 subscribers. In these days, the mechanically working teletypes were replaced by electronically driven devices (Telex). Even nowadays, in times of the internet, a few developing countries use this disaster safe kind of communication.

Below in the picture, you can see a paper tape sender. While typing the text, it was fed into the paper tape and could be send afterwards quite fast. This is quite equal how today's e-mail clients work: They buffer the text while the user inputs it until it is send in one go, instead of streaming the keyboard input "live" to the recipient. Of course this apperature is still fully executable. 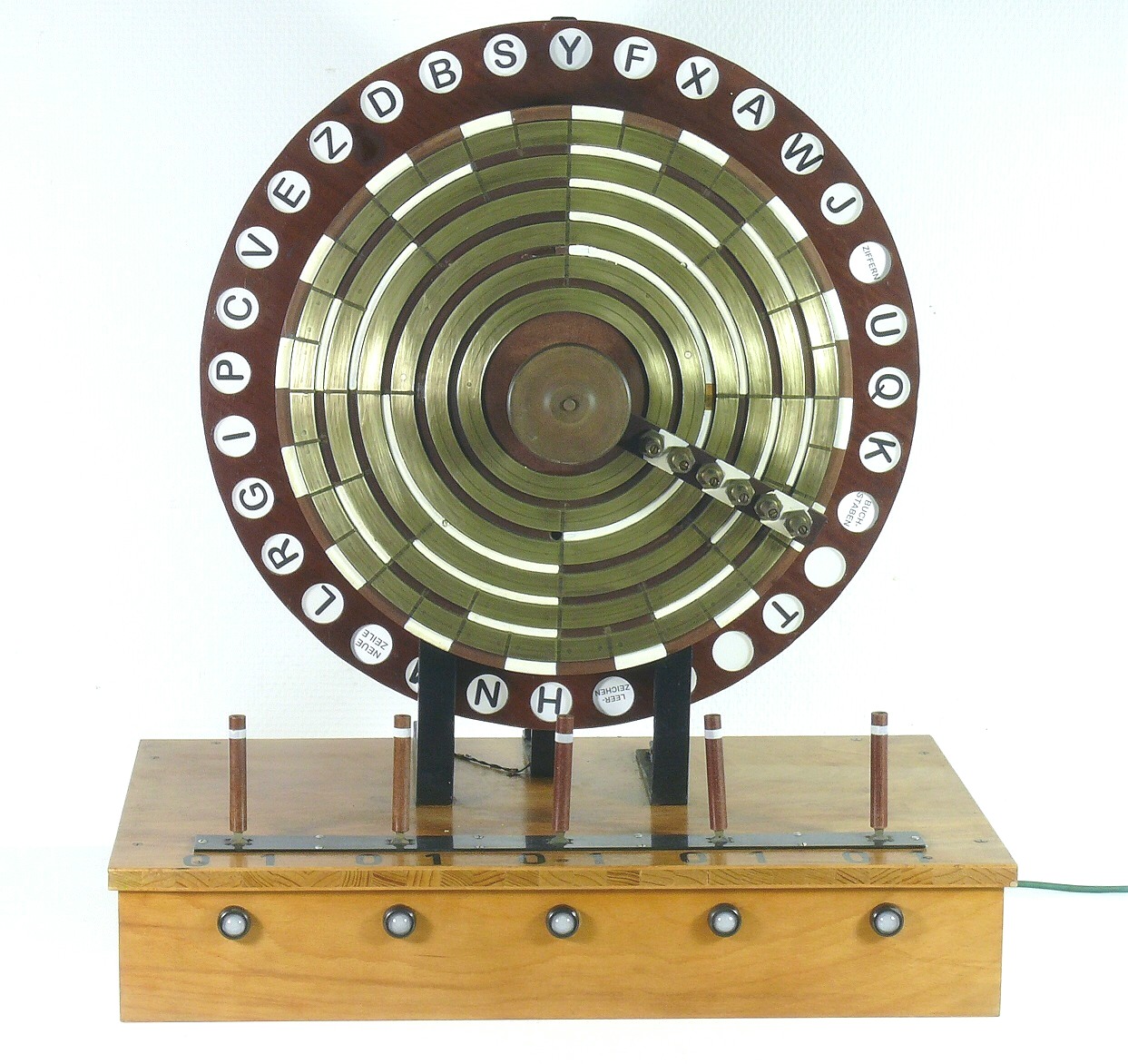 Recently we saved this large (70cm by 60cm) and wonderful "decoder" from scrap at a local university. This device translates 5 bit telegraph codes to their corresponding characters. It has been built as a demonstration object by the university's machine shop sometime between 1937 and 1949 and has been used extensively in lectures.
Principle of operation: A 5 bit value is set by means of the large levers. Then the code wheel is turned slowly until the correct character is in the top position which is denoted by lighting a lamp. If, e.g., 10101 is set and the code wheel is turned, the lamp will be lit under the character "Y".
What once was state-of-the-art technology is now used as a decoding device for our experimental workshops. There kids can decipher texts given in binary and thus gain experience with binary data representation.

As a kind of spin-off products of the teletype development, the electromechanical "wordprocessing systems" (1962 – 1964) were invented. They were capable of duplicating and writing texts automatically, using paper tapes and punch cards as storage media.
The technology of these devices was quite complex – at that time only big companies could afford these typically German devices.
The picture above shows the Olympia flexowriter with two paper tape readers and one paper tape puncher, year of manufacture 1962.